Christmas eve visit to Roma family in our neighborhood

Posted by Todd Price on December 24, 2014 in Uncategorized |One Comment

Since the first day we arrived in Budapest, there has been a family that has come to our door regularly to beg. Though we are very glad to give to them, it has always been difficult to communicate with them. Little by little I have been learning some Hungarian and little by little getting to know them a little bit better. They have seven children (sounds familiar!), ranging in age from 2 to 18. Sometimes the dad comes to beg alone, sometimes with the kids and sometimes the mom with the kids. We asked them once where they lived and he drew a crude map, but we never really followed up on that.

They are obviously Roma (Gypsy), but I wasn’t exactly sure which kind of Roma (remember that there are over 80 kinds). I guessed that they were Lovari (since most in and around Budapest are), so one day when they came to beg, I carried out the Bible (Lovari is one of the few Roma dialects with a complete Bible in translation). The mother, who always wore a frown and a fairly gruff expression, just lit up when I read to them a Bible verse or two in Lovari! It was her language!

Today we were able to go to the store and get lots of food for them, as well as presents for each of them. We went to their house, which we had arranged the day before. Their poverty is stunning. They live in a tumble-down house, about the size of our living room, apparently without running water. Normally the 9 of them live there, but today when we visited (Christmas eve) there were relatives there too–they kept coming out of the house to meet us, sort of like clowns from a phone booth! They were very warm and friendly. Yet the children are so dirty and the smell of unwashed bodies is strong.

Normally, I speak to them in broken Hungarian, but today I used my very limited Lovari (Romani) and they were thrilled. The mom just lit up when she heard it. I had a children’s Bible story book in Lovari and read several pages from it about the birth of Christ and she kept asking me to read more. She told us that she is pregnant and even asked if I would be the baby’s godfather!

They were very friendly, and served us soda and some of the walnut rolls we brought. Unfortunately, the dad was drunk, which is not the first time I’ve seen him in that condition.

It was such a joy to bring them a little joy on this Christmas Eve. Praise His name! 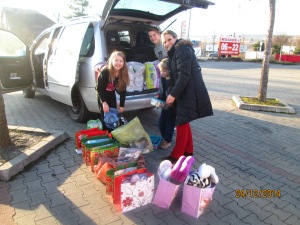 Groceries loaded in the van, packing up individual gift bags in the grocery store parking lot 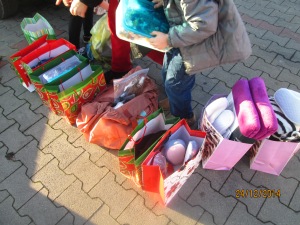 Gift bags for the parents and kids 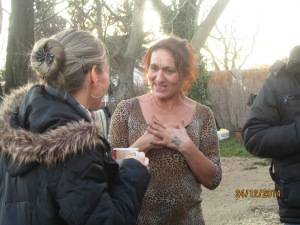 The mom telling Pam that she is expecting number 8! 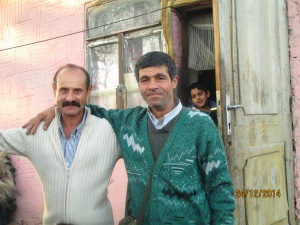 The dad and a relative 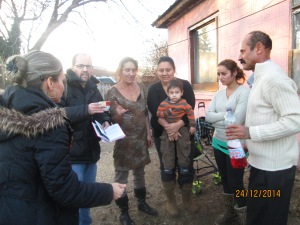 To help families spend more intentional time outside together and insprire worship of God through creation.

WordPress.com is the best place for your personal blog or business site.